President George W. Bush invited the mother of Ms. Megumi Yokota, one of many Japanese abductees by North Korea.

The scene in the White House was televised in Japan so many times from every key station.

President took about 30 minutes to have a listen to petition from the deprived, Japanese old lady who had even been converted to Christianity through her agony of losing her then junior-high school daughter having been spirited off on her way back from a school.

The supreme leader of North Korea, when he met Japanese Prime Minister Junichiro Koizumi in P'yongyang in 2002 and 2004, admitted that his agents had abducted Ms. Megumi Yokota in 1977 as part of a covert operation.

(Despite these efforts, the Japanese premier is yet to succeed in establishing diplomatic relations with North Korea.)

North Korea needed various types of Japanese to learn accurate and suitable use of the Japanese language which is so delicate that a foreign speaker, including North Korean agents conducting espionage worldwide, might be easily so identified.

North Korea officially announced that Ms. Megumi Yokota had committed a suicide by hanging herself in a garden of a mental hospital in the capital of Democratic People's Republic of Korea, that is North Korea, in 1993.

They presented her bones to Japanese Government that her husband, whom she had married in North Korea, collected and kept after having dredged them up from a tomb where her dead body burnt to ash had been buried. But the bones turned out to be false after DNA examination by Japanese authorities very recently.

Ms. Megumi Yokota must be alive in North Korea, as with her daughter being separated due to divorce.

However, the abduction cases involving North Korean agents had been long neglected in Japan.

The Yokotas were first informed in 1997 of the fact that their daughter had been abducted by North Korea. It is a secretary of a Japanese Communist Party’s law maker that provided the reliable information for, and helped the Yokotas in organizing an action group of abductees’ families.

In the United States, it is said that the Korean War is a forgotten war. But, it is yet to officially declare end of the war, while about 30,000 U.S. troops are stationed on the Korean Peninsula.

One particular incident during the Korean War is that when General Douglas MacArthur almost decided to use atomic (nuclear) bombs to destroy supply routes in territories of China, then U.S. President Harry S. Truman fired the legendary general to stop the use of atomic bombs.

Everybody says that Cuban Crises in 1962 has been the only danger that a nuclear war might have broken out.

But, such probability must have been more real in the borader area pulling in China, North Korea, and Union of Soviet Socialist Republics in 1951, just six years after the first use of atomic bombs on Hiroshima and Nagasaki, Japan, while the same president that had ordered the atomic-bomb attacks on Imperial Japan was still in the White House.

No U.S. media reportedly covered in earnest the visit by the mother of Ms. Megumi Yokota to the White House.

However, they would eagerly report anything that might happen in a large scale at the border located 700Km or 400 miles east of the capital of China, Beijing or Peking, which offers huge market to U.S. and Japanese corporations. 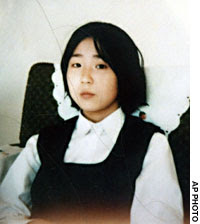 Ms. Megumi Yokota when she was abducted by North Korean secret agents from a Japanese city facing the Sea of Japan in 1977.


“LET MY PEOPLE LIVE IN PEACE”

Posted by EEreporter at 4/30/2006 02:01:00 PM Links to this post
Email ThisBlogThis!Share to TwitterShare to FacebookShare to Pinterest
Newer Posts Older Posts Home