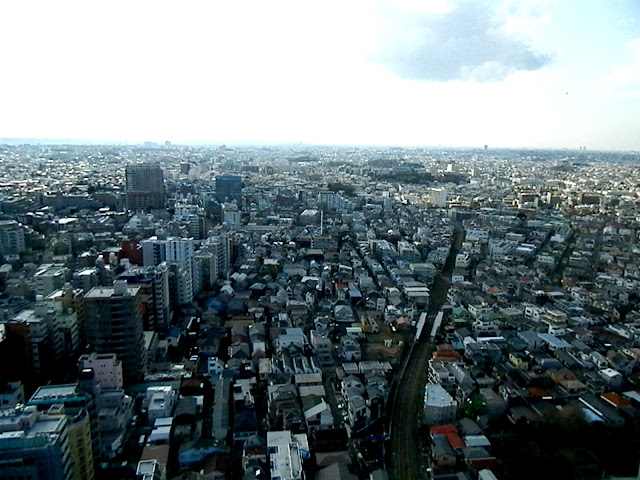 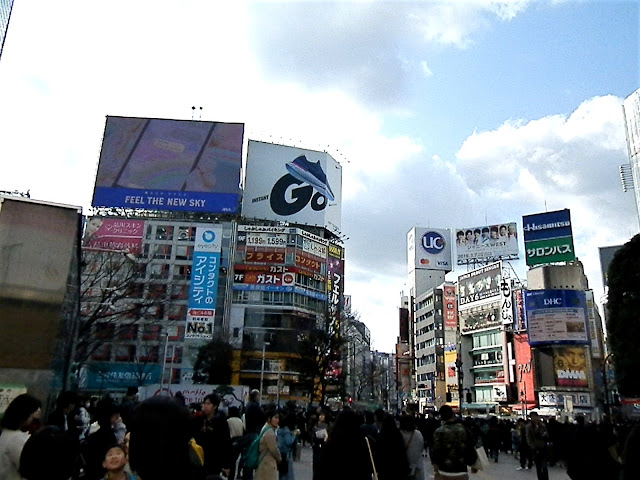 
Not Material Civilization but Mercy of God

Civilization destroys, changes, and utilizes the nature, although it has not yet ability to modify natural environment according to its will; for example, the mankind cannot change the climate or increase/decrease ambient temperature as it wants.  Destroying power of civilization against the nature can be seen in trend of deforestration. Longer term, the outlook is even worse. If humanity continues its pattern of endless consumption, their research indicates that less than one-fifth of Asia and Latin America's forest cover may remain by 2200.

It is also important how much development of civilization has contributed to increase of global human  population. 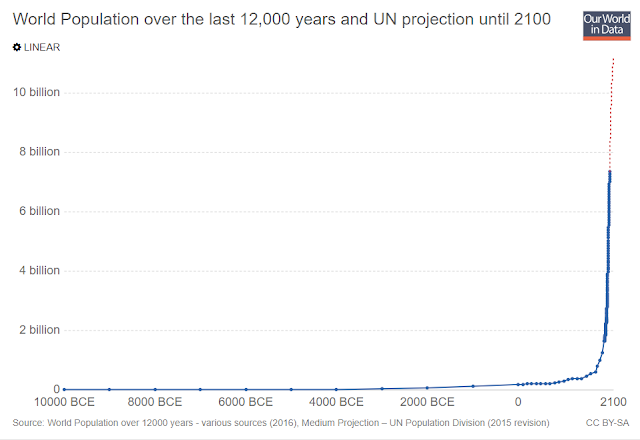 Then, what about production of cereal crops in the world?

So, population is rapidly increasing; accordingly energy use and food production are also increasing while the natural environment is globally being destroyed.  Future of the mankind or civilization cannot be rosy.

However, the leading country, the US, still has plenty of lands for agriculture and residence as well as natural resources.  No Americans are afraid that their civilization will face a catastrophic crisis in decades or during this century if outer world should suffer any. 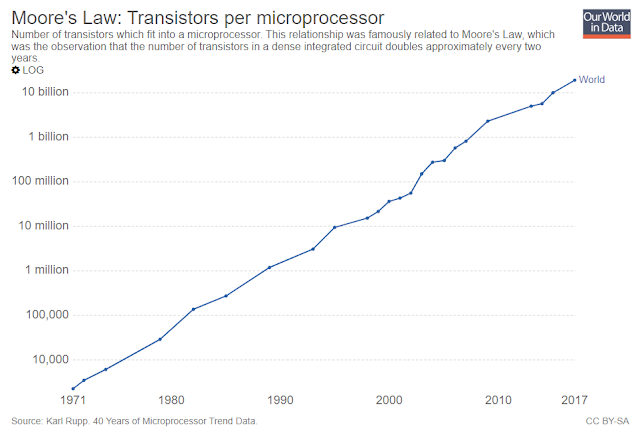 The functional chips, that is the microprocessors,  used at the core of high-tech products have been ever increasing its density or complexity.  This trend is not expected to cease soon.  More products, including cars and phones, will be equipped with AI.  And power of computation and communications will go on expanding in various sectors of human lives.  And even financial transactions will be further upgraded along with this technical trend. Generally speaking, as seen in the above figure of Dow Jones Industrial Average (DJIA), the US is getting richer, over some economic crises, all through the 20th century onward although the gap between the poor and the rich is expanding.

If advanced technologies continue to solve problems related to food production, disaster prevention, human health, social safety and security, expansion of trade and economy and so on, the earth is finite.  And the mankind cannot control the natural environment 100%, for example, such as prevention of dangerous global warming and occurrence of other great natural disasters.  And development of technologies itself is based on commercialism-based economy.  In other words, human desire-driven economy supports development of technologies.  It is not respect or good-will for humanity that is driving civilization but desire of people.  There is no assurance that this civilization will never encounter catastrophic events of any kind to the degree so that existence of the mankind will be at risk.

This material civilization might continue further for a few centuries without decisive catastrophes.  However, it is difficult that the mankind will survive and prosper further for 1000 years in the increasing trends of those various factors of the civilization.  For example, robots with super AI might take over.  And there will be nobody who will remember the mankind.

So it is said that everything goes by but the word of God is forever.

For the mankind to have true civilization that can continue for 2000 years or more, from now on, we have to set our civilization on true religion, specifically true Judaism, true Christianity, true Islam, etc. since salvation of minds and spirits of people should not come from development of material civilization but realized by mercy of God.


Mat 1:11 And Josias begat Jechonias and his brethren, about the time they were carried away to Babylon:
Mat 1:12 And after they were brought to Babylon, Jechonias begat Salathiel; and Salathiel begat Zorobabel;

Posted by EEreporter at 1/11/2019 02:40:00 PM Links to this post
Email ThisBlogThis!Share to TwitterShare to FacebookShare to Pinterest

"the Spirit like a dove descending upon him" - God is Spirit, though, Creating the Material Universe 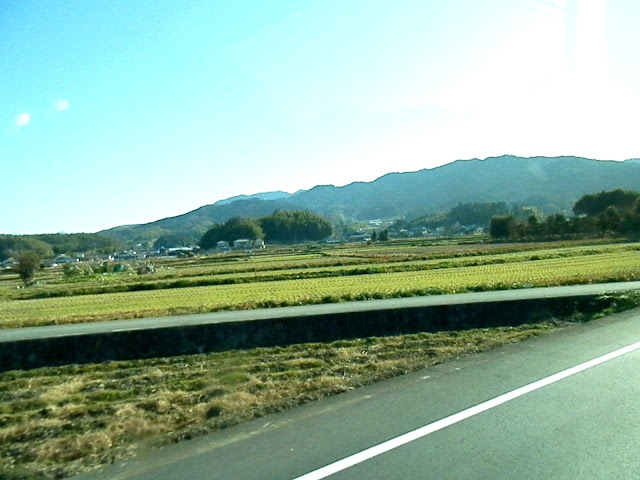 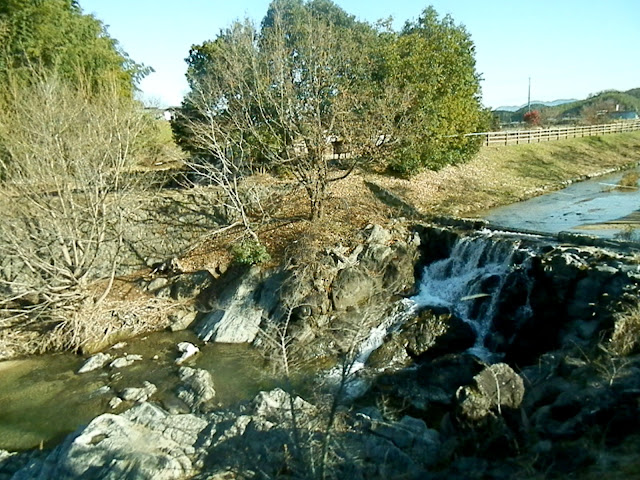 Asuka Area, the Original Place of Yamato Imperial Regime in the 4th Century or Before, Japan


God is Spirit, though, Creating the Material Universe

It is said that God is spirit; accordingly we have to show our respect to God with our spirit.

No matter how much we study the world and the universe, we cannot find material God, or we cannot see God in the form we can understand.  However, we can feel interference with the nature around human beings by God.  As an example, the sun and the moon look in a similar size to each one from the earth.  There is no scientific reason for this phenomenon, but due to this configuration in the sky with the similar sizes of the sun and the moon, human cultures and religions have been influenced.

The universe is based on a theory that the absolute magnitude of charge of an electron is equal to that of a proton, thus assuring formation of an electrically neutral atom.  It is unknown why this theory is possible in the universe, whereas without it or with a different theory, no substances are possible in this universe.  In other words, if another theory is true in this universe, no atoms, molecules, and matter can be possible.

What we have to think is only that God made this universe based on arbitrary physical theories to make the universe constituted in a way suitable for emergence and development of human beings.  The more scientists learn, the more they should find traces of interference by or influence of God.

However, in most the periods in these 2000 years ago, people had no such knowledge of modern science, but many people came to believe God through religious traditions of Judaism, through Christ Jesus, or through Quran.   It is because God is spirit, and men had spirits in any old time.

Our spirits and minds interact with matter and with natural, social, and human phenomena.  However, we feel, think, and make decisions following work of our own spirits and minds.  And, in freedom of our minds, we can accept or deny God.  And, as the world and the universe are designed and built according to God's will, it seems natural that men living in this world and universe perceive, realize, find and accept God.

This is one theory, although it is unknown why this theory is possible.

Mar 1:10 And straightway coming up out of the water, he saw the heavens opened, and the Spirit like a dove descending upon him:
Mar 1:11 And there came a voice from heaven, saying, Thou art my beloved Son, in whom I am well pleased.
Posted by EEreporter at 1/10/2019 10:45:00 PM Links to this post
Email ThisBlogThis!Share to TwitterShare to FacebookShare to Pinterest 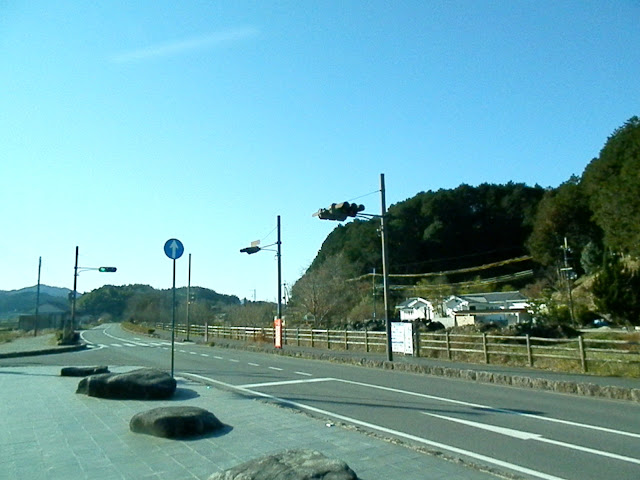 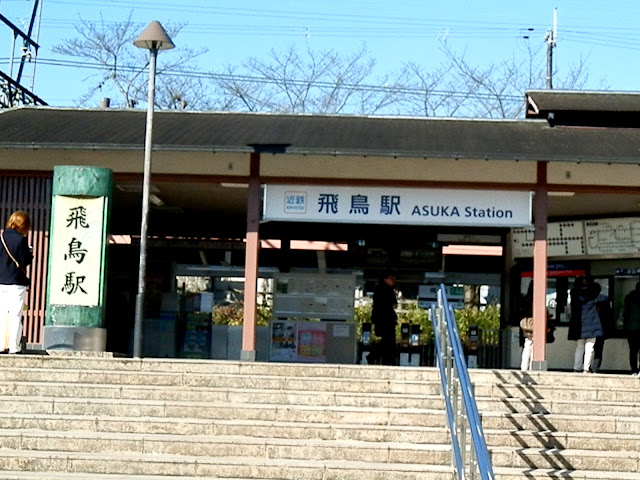 
Christ Jesus and the Temple of Jerusalem

According to the Gospels, Christ Jesus did not neglect the Temple in Jerusalem.

Even when Christ Jesus was a Child, He showed respect to the Temple of Jerusalem by calling it "my father's business":


Luk 2:45 And when they found him not, they turned back again to Jerusalem, seeking him.
Luk 2:46 And it came to pass, that after three days they found him in the temple, sitting in the midst of the doctors, both hearing them, and asking them questions.
Luk 2:47 And all that heard him were astonished at his understanding and answers.
Luk 2:48 And when they saw him, they were amazed: and his mother said unto him, Son, why hast thou thus dealt with us? behold, thy father and I have sought thee sorrowing.
Luk 2:49 And he said unto them, How is it that ye sought me? wist ye not that I must be about my Father's business?

It is impossible that God was in the Temple of Jerusalem and simultaneously God was outside the Temple as the man Christ Jesus.

It is extremely difficult to regard Christ Jesus as God who should be enshrined in the Temple in Jerusalem, while Christ Jesus, who was God, was preaching outside the Temple.

Mar 1:9 And it came to pass in those days, that Jesus came from Nazareth of Galilee, and was baptized of John in Jordan.
Posted by EEreporter at 1/09/2019 12:31:00 AM Links to this post
Email ThisBlogThis!Share to TwitterShare to FacebookShare to Pinterest 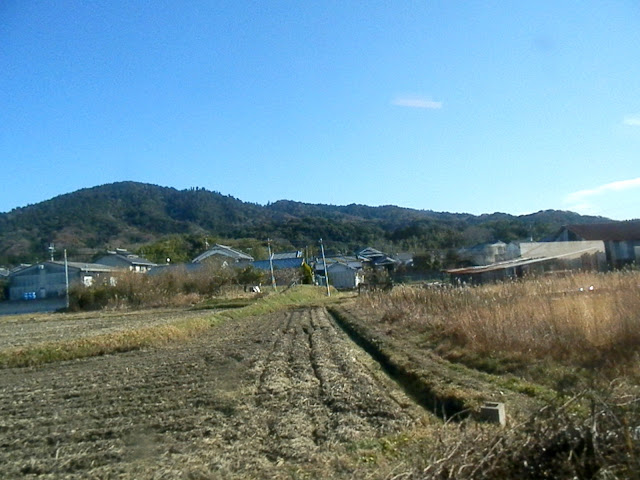 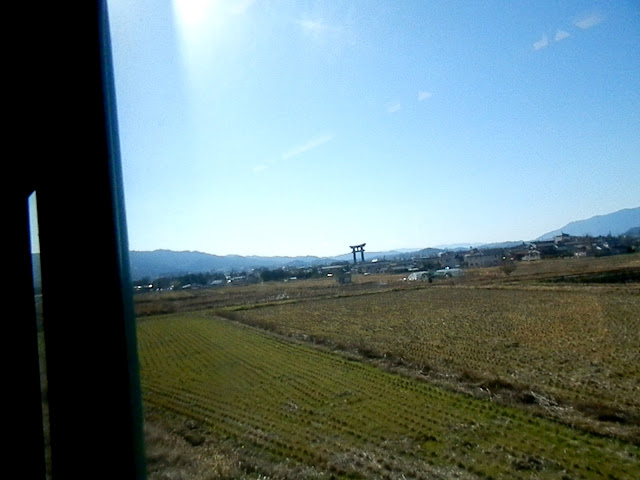 A Holy Mountain in Nara, Japan

No matter how much people are taught teachings by God, they cannot necessarily live up to these teachings.

There have been crimes and villains among Jewish people as many as those among Christians, Muslims, and pagans.  It does not necessarily mean that a person lives up to teachings by God if the person is a member of a religious community that admits existence of God.

So, the key to understanding and criticizing Christianity is the Christian ideology that Christ Jesus is God, which was however not claimed by Christ Jesus Himself.


Mat 1:5 And Salmon begat Booz of Rachab; and Booz begat Obed of Ruth; and Obed begat Jesse;
Mat 1:6 And Jesse begat David the king; and David the king begat Solomon of her that had been the wife of Urias;
Mat 1:7 And Solomon begat Roboam; and Roboam begat Abia; and Abia begat Asa;
Posted by EEreporter at 1/06/2019 12:26:00 PM Links to this post
Email ThisBlogThis!Share to TwitterShare to FacebookShare to Pinterest
Newer Posts Older Posts Home