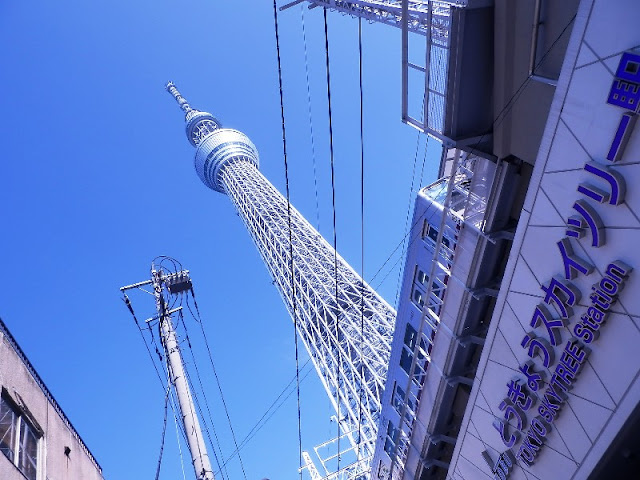 Mr. Shinya Yamanaka of Japan won the Nobel Prize for his iPS study this year.

But he was not a blessed medical doctor.

After graduation from Kobe University, he first worked as a surgeon but could not make great progress in his skill.  So, Mr. Yamanaka changed his career to medical research.  Then he went to the US to advance his study.

After returning to Japan, he started to tackle some biological issue in a university in Osaka.  But he was not regraded as a promising doctor.  He received very limited budget for his study.  There were no assistants in his laboratory.

He even asked his wife and daughter to go to an airport to receive lab mice some US laboratory sent to him.  He was busy taking care of rats in his laboratory alone.  He was really depressed about his circumstances finally.

So, he decided to abandon his medical study.  He thought to go back to a hospital and diagnose patients.  To fix his mind he planned to buy a house.  As a new hose cost much, he thought he could be determined to work as a clinician and make more money.   But, one night his mother saw her late husband in dream at night; he said to her not to have his son buy a new house.  So, following this advice from his late father who had been glad to see his son become a medical doctor in his dying bed some years before, Mr. Yamanaka abandoned the idea of ending the career in research.

He then applied for a position as assistant professor in a university in Nara Prefecture, south of Kyoto.  At the time he held a new subject of study: Make a master cell from a skin cell.

Then Mr. Yamanaka could make great progress. Finally he was rewarded the Nobel Prize to "for the discovery that mature cells can be reprogrammed to become pluripotent." He could show his iPS cells were "pluripotent, i.e. capable of generating all cell lineages of the body."

One cell on the skin of a man can be engineered to became a primary cell that can develop again to become any organ or part of his body, according to his discovery.

So, if Mr. Yamaka had bought a new house, his discovery would not have been realized.

Today, Mr. Yamanaka is invited by many foreign universities that offer to him a big salary and better environment for his research.  But he is not going to leave Japan.  Then his late father might help him again even in dream at night.

Posted by EEreporter at 10/12/2012 11:08:00 PM Links to this post
Email ThisBlogThis!Share to TwitterShare to FacebookShare to Pinterest

"his disciples asked him again" - New Economics for Japan 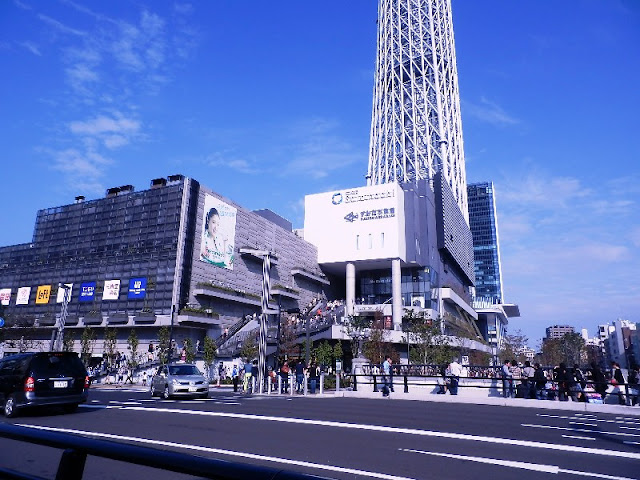 Now the annual conferences of IMF and the World Bank are held in Tokyo.

The amount of total assets possessed by Japanese individuals has reached about $20 trillion.

But most of this money is in domestic bank accounts.  And Japanese banks buy government bonds in large quantity.

Even it is suspected that the Japanese Government does not especially recommend Japanese individuals to invest into foreign markets.  Japanese money should be kept in Japan to sustain the government budget.  Maybe they thin so.

Due to deflation, continuing more than a decade, the Japanese Government has experienced a plunge in tax revenues for many years.  The total amount of accumulated financial deficits of Japan gets 200% in a ratio over its GDP, which is the largest or the worst in the world.  Therefore to compensate the budget deficit, the Japanese Government issued so many bonds year after year.

On the other hand, the total accumulated amount of direct investment from Japan to China was $45 billion from 2001 to 2010.  It accounted for about 7% of the total direct foreign investment into China.  However, there is also a huge amount of transfer of technology and know-hows from Japan to China.  Japan has helped Chinese economic growth as one of major players or as the key contributor.

Japanese deflation has progressed in parallel with an increase of Japanese involvement in Chinese industry and economy.  Japanese makers built plants and factories to make the best use of cheap labor force in China.  It is estimated that 6,000 Japanese makers are in operation in China while total 15,000 Japanese businesses have offices and plants in China.  Accordingly, the wage level of Japanese workers in Japan has been heavily influenced.  With intensification of global economy, Japanese workers have to face competition with less salaries.  As a result, tax revenues of the Japanese Government has continued to decline.

But, Japanese businesses are not losing in this global competition in economy and industry.  They are securing reasonable profits, making products with less costs and less wages.  So, corporate executives and other middle-class workers have received reasonable payments.  It resulted in $20 trillion of total assets possessed by Japanese individuals.

In fact, though the Japanese society has suffered deflation for 15 years, the number of wealthy people is increasing in Japan.

But, the Japanese Government has recently decided to take a concrete measure to deal with the huge budget deficit by increasing the consumption tax rate from 5% to 10% in several years.

But, any conventional financial measures do not look like working well in this scale of economy of Japan which is virtually and substantially the second largest in the world.  (Chinese economy does not possess quality necessary to be evaluated on equal terms with Japan and the US.)

So, a new theory is needed to handle the financial problem of Japan.

The point at issue is that such creative work  looks so costly even with $20 trillion of  individual assets all the Japanese have.  But Japan has to devise one.

Incidentally, Japan has no Nobel laureates in economics so far, though 16 Japanese natural scientists have won the Nobel prize.


Mar 10:9 What therefore God hath joined together, let not man put asunder.
Mar 10:10 And in the house his disciples asked him again of the same matter.
Mar 10:11 And he saith unto them, Whosoever shall put away his wife, and marry another, committeth adultery against her.
Mar 10:12 And if a woman shall put away her husband, and be married to another, she committeth adultery.
Posted by EEreporter at 10/10/2012 11:25:00 PM Links to this post
Email ThisBlogThis!Share to TwitterShare to FacebookShare to Pinterest 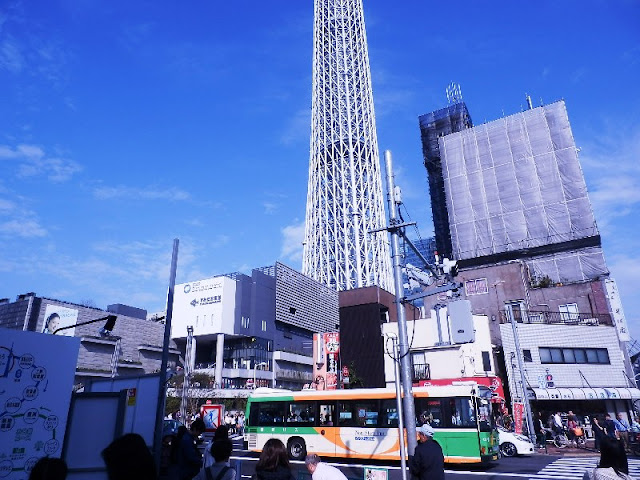 How has the US Government ever discussed the Senkaku Islands issue?

Lending clarity to the China-Japan dispute

However, the Japanese dismiss this version. They contend that Senkaku/Diaoyu was discovered by Japan in 1884. Then Senkaku/Diaoyu showed no traces of Chinese control, nor did China protest any activity by the Japanese on the islands. It was made a part of Okinawa in 1895 and markers erected. Okinawa was carved from the Ryukuku Islands (once an independent sovereign kingdom incorporated into Japan as Ryuku-han in 1872). The Japanese contend that Senkaku/Diaoyu was never “transferred to Japan via Treaty of Shimonoseki” as the Chinese claim....
Hara notes that Senkaku (and Okinawa) were placed under US control under Article 3 of the peace treaty. The US relinquished its administrative rights over Senkaku in 1972, but despite “reversion” remained stationed in Okinawa. Japan’s residual sovereignty over Senkaku/Diaoyu was recognised by successive Presidents—Eisenhower, Kennedy and Johnson. But Nixon made a departure.

As Nixon at the time wanted to improve relationship with China to end the American involvement in the Vietnam War where China played some supportive role to North Vietnam, Nixon refrained from continuing support for Japan regarding the sovereignty issue over Senkaku.

U.S. administration of the islands began in 1953 as a result of the 1951 Treaty of Peace with Japan. The Treaty did not mention the Senkakus (Diaoyu/Diaoyutai), but it referred to other islands that had reverted to Chinese control or which China claimed. These included Taiwan, the Pescadores (off the western coast of Taiwan), as well as the Spratlys and the Paracels (both in the South China Sea). Article 3 gave the United States sole powers of administration of "Nansei Shoto south of 29 north latitude (including the Ryukyu and the Daito Islands)...." In 1953, the U.S. Civil Administration of the Ryukyus issued U.S. Civil Administration of the Ryukyus Proclamation 27 (USCAR 27), which defined the boundaries of "Nansei Shoto [the southwestern islands] south of 29 degrees north latitude" to include the Senkakus.  At the time of the signing of the Okinawa Reversion Treaty, several State Department officials asserted that following the signing of the Japan Peace Treaty, "Nansei Shoto south of 29 degrees north latitude" was "understood by the United States and Japan to include the Senkaku Islands." Moreover, during the period of U.S. administration, the U.S. Navy established firing ranges on the islands and paid an annual rent of $11,000 to Jinji Koga, the son of the first Japanese settler of the islands. China has described the U.S.-Japan understandings related to the islands as “backroom deals” that are "illegal and invalid."


So, the US has conventionally admitted that Japan possesses the Senkaku Islands, since it came to be directly involved in international and diplomatic issues in East Asia after WWII, though the US colonized the Philippines before WWII. 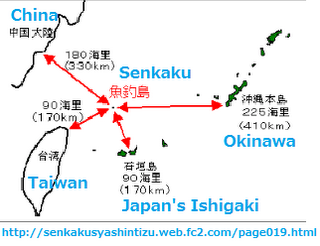 More specifically, the Senkaku Islands are situated far closer to Japan, namely Okinawa Prefecture with so many islands such as Ishigaki, than to mainland China.  The Senkaku Islands also naturally accompanies 36 Okinawa islands.

The island to the right in the Senkaku Islands (in the above map) is called Taisho-to which is possessed by the Japanese Gov. for more than a century  unlike other islands of Senkaku.

Therefore it is very unreasonable that China recently started to release its hostility to Japan in the wake of the transaction of the Japanese Government, concluded in September 2012, purchasing the main island, called Uotsuri-jima, and two other small ones accompanying Uotsuri of Senkaku from a private Japanese owner.

Incidentally, the history of Taiwan has made it a little complicated, but the Ming dynasty (1368-1644) of China regarded the Senkaku Islands as lands out of its territory as Taiwan was then.  It could be confirmed in some old maps made in Ming.  The then Chinese Imperial court regarded Senkaku as part of the Ryukyu (Okinawa) kingdom which brought a tribute to Ming.

Finally, you had better refer to the Historical Analysis on the Senkaku Islands in http://eereporter.blogspot.jp/2010/10/yesterday-two-miracles-however-you.html.