"they began to pray him to depart" - Anti-Nuclear Tent 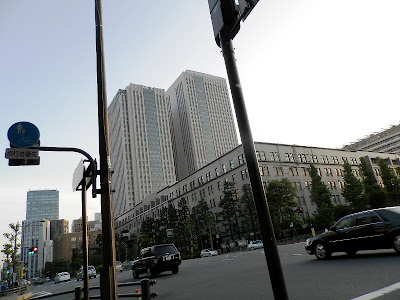 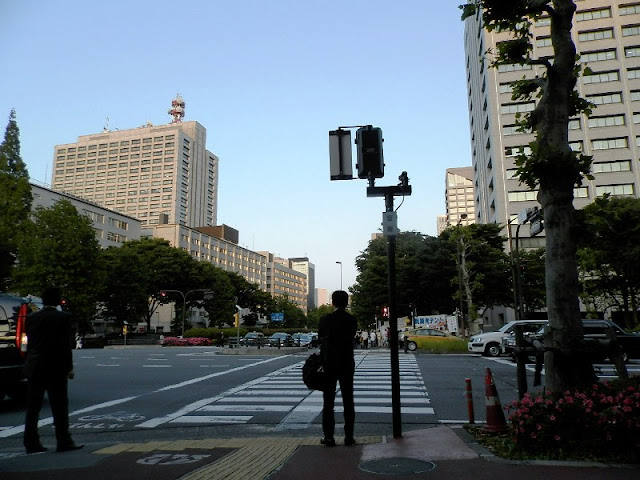 There is an anti-nuclear group in Japan who set up and has maintained a tent before the office building of the Ministry of Economy, Trade and Industry in Tokyo.

First the Japanese police tried to drive them out, but the lot where they set up the tent was not part of public street.  The police could not apply the traffic law.  The place is within the premises of the Ministry's building.

Then the Ministry tried to oust them from the corner in the premises in vain.  Protesters have never troubled business of the Ministry.  No obstruction has been made to workers and visitors to the Ministry.  Staff of the Ministry handed warning notices to the anti-nuclear protesters in several times but they didn't leave the site.

So, now the Ministry has taken the case to a Tokyo court.

Japanese people have a right to made a demonstration.  The society supports anti-nuclear demonstrations.  So, as long as they do not interfere with business of the Ministry, they are essentially entitled to use a public space to appeal to the government for their anti-nuclear cause.

There are always several demonstrators in the tent of a size of an RV car 24 hours a day, every day since September 2011.
.
It is said those demonstrators are mostly ex-students of the anti-Vietnam War era of late 1960s and early 1970s.

Posted by EEreporter at 5/17/2013 11:31:00 PM Links to this post
Email ThisBlogThis!Share to TwitterShare to FacebookShare to Pinterest

"he withdrew himself into the wilderness" 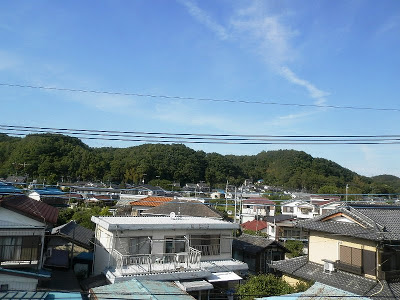 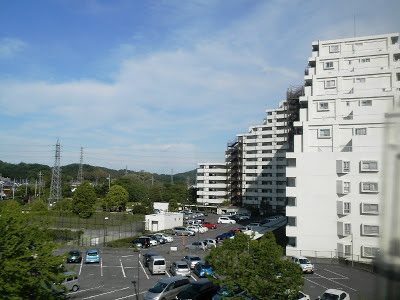 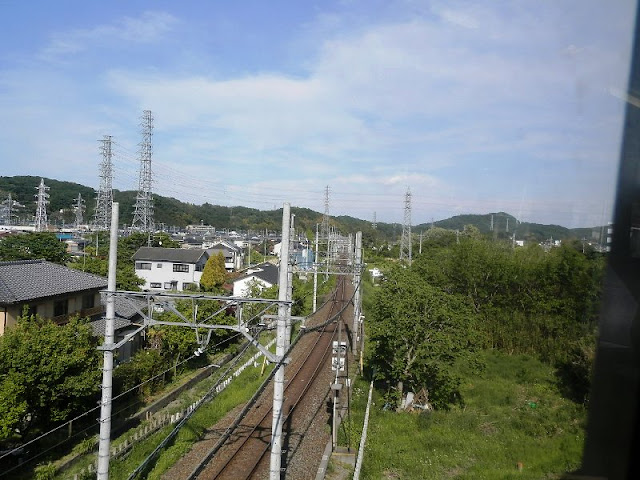 
Luk 5:15 But so much the more went there a fame abroad of him: and great multitudes came together to hear, and to be healed by him of their infirmities.
Luk 5:16 And he withdrew himself into the wilderness, and prayed.
Luk 5:17 And it came to pass on a certain day, as he was teaching, that there were Pharisees and doctors of the law sitting by, which were come out of every town of Galilee, and Judaea, and Jerusalem: and the power of the Lord was present to heal them.
Posted by EEreporter at 5/16/2013 11:17:00 PM Links to this post
Email ThisBlogThis!Share to TwitterShare to FacebookShare to Pinterest 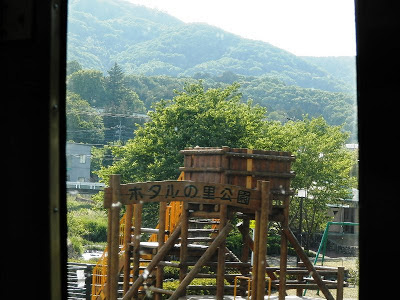 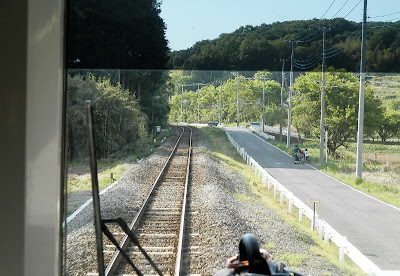 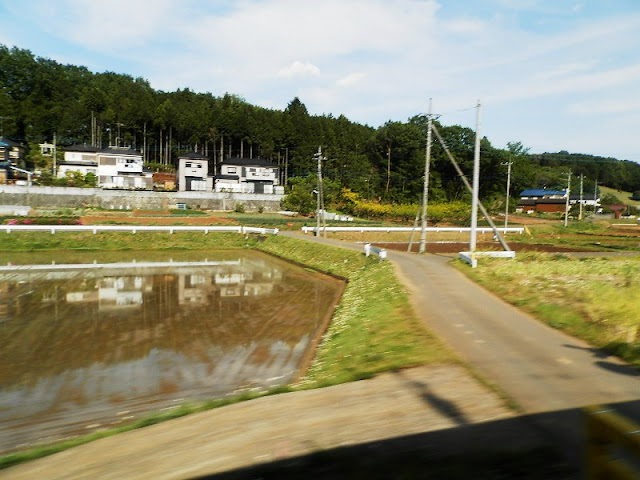 A Village Park, A Village Road, and Rice Farms around Tokyo

1Th 5:15 See that none render evil for evil unto any man; but ever follow that which is good, both among yourselves, and to all men.
1Th 5:16 Rejoice evermore.
Posted by EEreporter at 5/15/2013 11:57:00 PM Links to this post
Email ThisBlogThis!Share to TwitterShare to FacebookShare to Pinterest

"him that liveth for ever and ever" - Quarks from Void 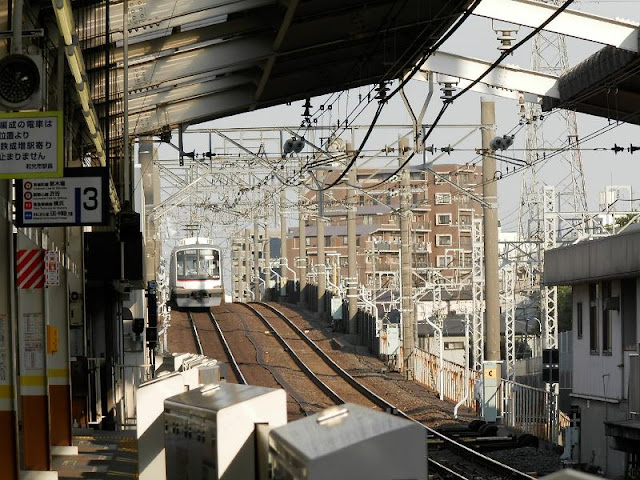 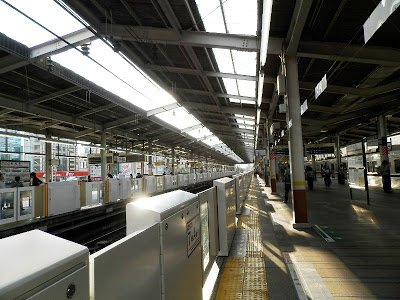 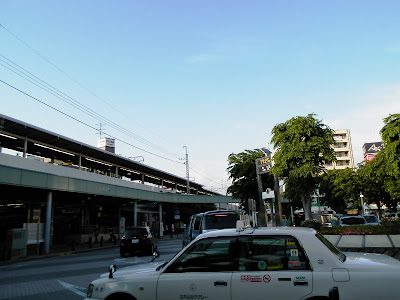 A Railroad Station in a Suburb of Tokyo

There are only three types of important elementary particles: a down quark, an up quark, and an electron.

The absolute value of electric charge for these particles is defined as 1/3 for a down quark, 2/3 for an up quark, or 1 for an electron.

However we should redefine them as 1 for a down quark, 2 for an up quark, and 3 for an electron.  The larger the electric charge is, the smaller the mass of an elementary particle is.  So each of these three particles and their anti-particles has 10 MeV (a down quark),  5 MeV (an up quark), and 0.5 MeV (an electron).

It tells how these particles were created from the void before the beginning of this material universe.

At the beginning, of course, a particle "d" having -1 of electric charge and 10 Mev of mass was created.

And at this stage it can be stable over the void since no more particles are needed to contain electric charge while energy from the void is purely transferred to mass which allows separation of particles from the void to the material universe.

Since it is the three-dimensional space, it is enough to have only three different types of electric charge, that is, 1, 2, and 3 including minus values of them.

Rev 5:14 And the four beasts said, Amen. And the four and twenty elders fell down and worshipped him that liveth for ever and ever.

Posted by EEreporter at 5/14/2013 09:15:00 PM Links to this post
Email ThisBlogThis!Share to TwitterShare to FacebookShare to Pinterest

"but the people magnified them" - Stable Nucleus 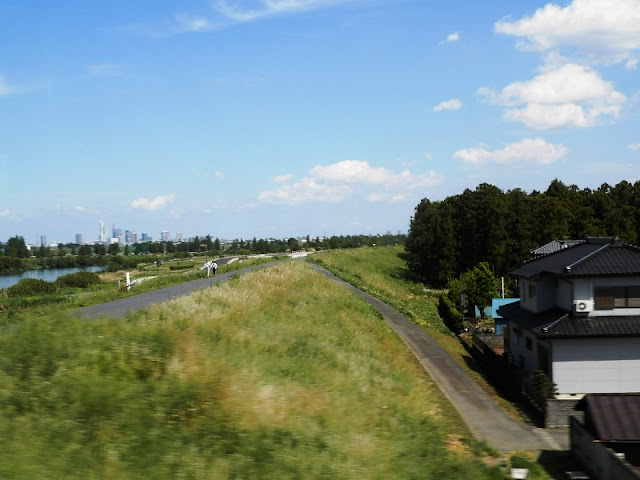 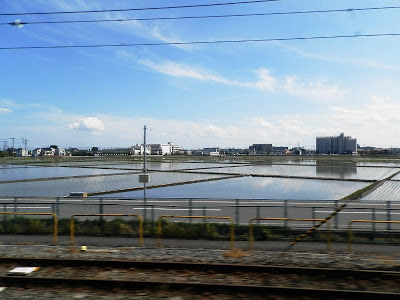 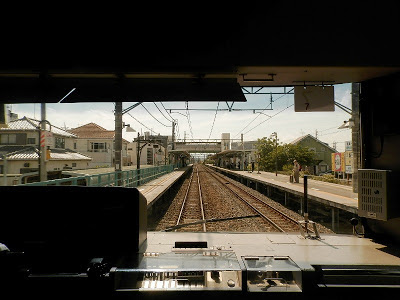 Some Suburbs of Tokyo with Paddy Fields in May

Why is a neutron stable in an atomic nucleus (where a neutron is combined with a proton) while it is very unstable outside a nucleus?

But it is apparent that the pair looks more stable than the standalone elementary particle if d is expressed with 10 and u with 5 following their mass.


As you see, there can be two combinations (or protons) of (5 + 10 + 5) in the above stable status, if each particle moves more freely and interacts with one another more freely.

Act 5:8 And Peter answered unto her, Tell me whether ye sold the land for so much? And she said, Yea, for so much.
Act 5:9 Then Peter said unto her, How is it that ye have agreed together to tempt the Spirit of the Lord? behold, the feet of them which have buried thy husband are at the door, and shall carry thee out.
Act 5:10 Then fell she down straightway at his feet, and yielded up the ghost: and the young men came in, and found her dead, and, carrying her forth, buried her by her husband.
Act 5:11 And great fear came upon all the church, and upon as many as heard these things.
Act 5:12 And by the hands of the apostles were many signs and wonders wrought among the people; (and they were all with one accord in Solomon's porch.
Act 5:13 And of the rest durst no man join himself to them: but the people magnified them.
Act 5:14 And believers were the more added to the Lord, multitudes both of men and women.)
Posted by EEreporter at 5/13/2013 11:29:00 PM Links to this post
Email ThisBlogThis!Share to TwitterShare to FacebookShare to Pinterest

"a man full of leprosy: who seeing Jesus fell on his face" - Void and Quarks 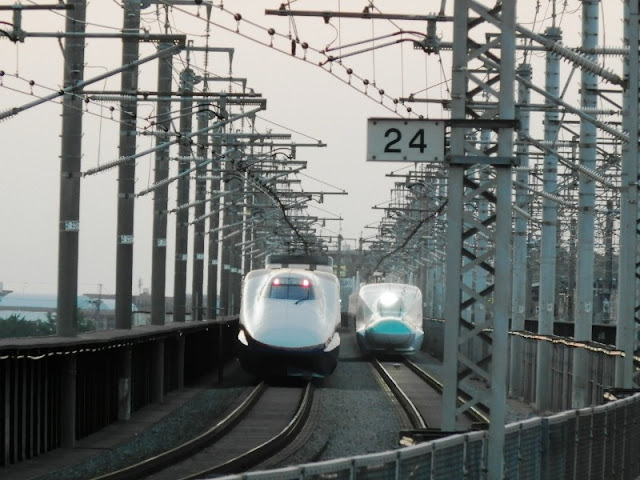 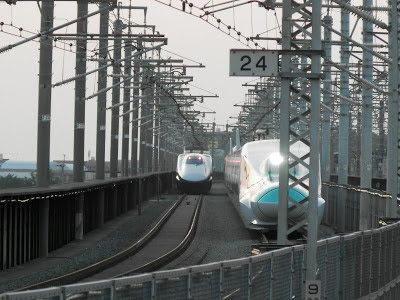 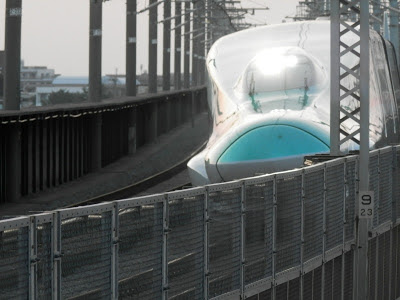 These atoms constitute a molecule which forms in aggregate a cell of the human body and other living things, for example.

An atom is made of electrons and an atomic nucleus.  The nucleus consists of protons and neutrons, while a protons and a neutron are made of three quarks, respectively.

But as d is twice heavier than u, a neutron is unstable, since it looks like one unit of light u supports two units of heavy u.

So, a neutron changes to a proton if placed alone in space.

Anyway, this two types of quarks are basic components that build this material world.  And, it is thought that this material universe is created from the sheer void.  Therefore this void must consist of quarks and anti-quarks since they can negate each other to become null.   In nother word, the void is full of these quarks in the following way:

It is also though that this excitation level is very small so that these newly created neutrons and anti-neutrons are soon engulfed by a surge of void energy to be disintegrated and disappear.

Nonetheless, if neutrons have been upheld at a higher level than the surge of the void energy and a level of anti-neutrons, they can survive to form this material world we now live in.

It is so, since other two essential components, protons and electrons, are induced from neutrons through the following transition.


Of course from the void, a proton (u + d + u) can be directly created in a similar manner.

Anyway, it is very likely that the void is full of up quarks and down quarks in addition to anti-up-quarks and anti-down-quarks disposed side by side in sequence.

Luk 5:11 And when they had brought their ships to land, they forsook all, and followed him.
Luk 5:12 And it came to pass, when he was in a certain city, behold a man full of leprosy: who seeing Jesus fell on his face, and besought him, saying, Lord, if thou wilt, thou canst make me clean.
Luk 5:13 And he put forth his hand, and touched him, saying, I will: be thou clean. And immediately the leprosy departed from him.
Posted by EEreporter at 5/12/2013 11:22:00 PM Links to this post
Email ThisBlogThis!Share to TwitterShare to FacebookShare to Pinterest

"all the devils besought him" - Mass and Energy Conservation 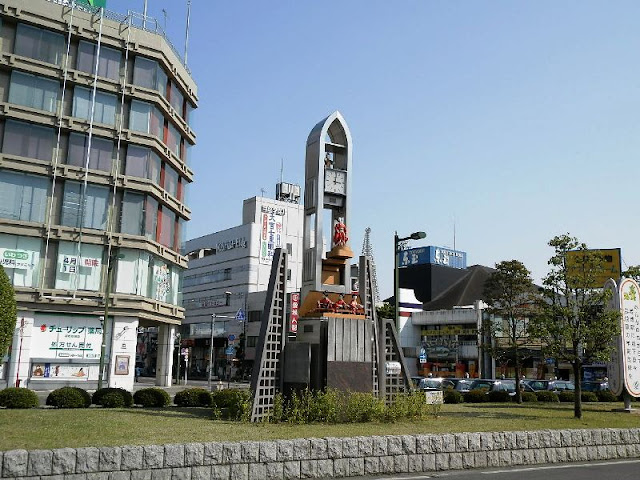 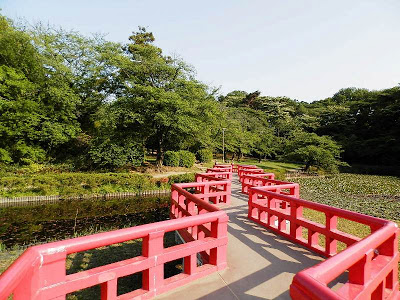 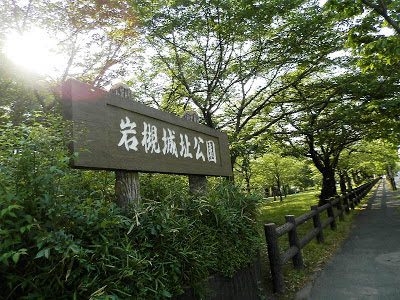 A Public Park around Tokyo

But what mechanism works in the transition from a neutron to a proton?

where νe* is an electron antineutrino which has no electric charge.

The above equation can be expressed in a different manner:

But this transition has hidden steps.

In these hidden steps, an anti-quark is generated to balance electric charge with a newly generated up quark and an electron.

So, correctly the above equation can be expressed as below:

When the down quark and the anti-down quark negate each other, they generate not only an electron antineutrino but also a certain amount of energy E.  This energy offsets the energy borrowed when one anti-down quark, one up quark, and one electron were created.

Finally,  energy is preserved and electric charge is also conserved.

Mar 5:9 And he asked him, What is thy name? And he answered, saying, My name is Legion: for we are many.
Mar 5:10 And he besought him much that he would not send them away out of the country.
Mar 5:11 Now there was there nigh unto the mountains a great herd of swine feeding.
Mar 5:12 And all the devils besought him, saying, Send us into the swine, that we may enter into them.
Mar 5:13 And forthwith Jesus gave them leave. And the unclean spirits went out, and entered into the swine: and the herd ran violently down a steep place into the sea, (they were about two thousand;) and were choked in the sea.

Posted by EEreporter at 5/12/2013 12:30:00 AM Links to this post
Email ThisBlogThis!Share to TwitterShare to FacebookShare to Pinterest
Newer Posts Older Posts Home