After the Beginning There Prepared Were Crude Oil and CO2 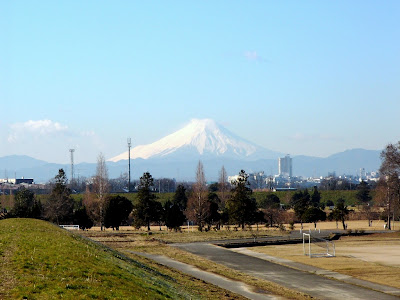 After the Beginning There Prepared Were Crude Oil and CO2

In the holy night of January 1, 2008, when I turned on the TV for the first time in these three days since having viewed Mr. Fidel Castro in an interview program on December 29, 2007, I happened to watch a climate change/global warming-related program presented by Japan's NHK TV station.

It reported that an ice shelf with a size 1.5 times larger than Tokyo Prefecture was recently collapsed to the sea from the Antarctic Continent.

It also reported on advanced business dealing with CO2 emission credits in Europe.

It did not forget to focus on Mr. Al Gore.

But, it did not focus on the late Ms. Benazir Bhutto.

They should be focused on Religious Revolution, too.


SECTION 2: Courage Here and There

...Benazir Bhutto gave her life for her country; Democrats so often lack the courage of their convictions to risk even a few points in the polls; and Al Gore racks up the prizes and awards, no doubt deserved, but sadly silenced when the man who should have been leader of the free world had higher priorities....

Good-bye, Benazir. You may be gone, but you will be remembered and honored. Perhaps some day in the land that gave us Washington and Lincoln, some heroic leader will emerge once again, inspired by your courage and your example, and rise above the mediocrity and timidity of our times, as you did in yours....

Indeed, Benazir Bhutto was killed in the confusion caused by problems Islam cannot address so far.

Truly, Mr. Al Gore seems to be avoiding any fatal risks by carefully detaching himself from a possibility to become another JFK or Robert Kennedy, if not another Martin Luther King Jr., if I may say so.

The answer is, ultimately, a Religious Revolution both in the U.S. and in Pakistan.

Globally even the climate change cannot be adequately and effectively addressed without a Religious Revolution among mankind.

New York Times Online reported on one American Dream being realized in South Dakota due to discovery of hopeful oil mines.
http://www.nytimes.com/2008/01/01/us/01dakota.html?_r=2&hp&oref=slogin&oref=slogin

...“It seems like God flew over this country, and a dart landed on Granddad's homestead,” said John Warberg, who is being paid royalties for the new oil well on the land where his grandfather's crumbling, nearly century-old homestead shack stands....

but many scientists suspect that the Bakken may contain 200 billion barrels of oil — significantly more, for instance, than the much debated field in the Arctic National Wildlife Refuge....

Mr. Warberg, 55, said that he sometimes missed the solitude and silence he grew up with here, but he proudly pointed out the well that carried his family name on its sign. Standing on a rise beside the well on a recent evening, the distant sound of drilling echoed. The glow of flares — natural gas burning off — warmed the air and dotted the landscape...

“I hope the place won't change, but it probably will,” he said. “I have thought about this a lot. I guess what I hope is that I don't change.”

Indeed I hope that people like Mr. Warberg would also join a Religious Revolution.

Truly, they will then stay being unchanged and good old Americans, even if they are given oil fields by the God, thus passing a trail for Heaven.

There are many arguments on TV programs in Japan, too.

One claims that there is no sense of seriousness, sincerity, and tension in most of TV programs broadcast in this Holiday Season which is still going on here in Japan.

TVs, PCs, and cellular phones may be the three Pandora's boxes.

Not to be contaminated by poisonous air they are lavishly sprinkling, you may like to retreat somewhere very remote, say, in North Dakota.
http://www.commondreams.org/archive/2007/09/06/3664/

Finally, in South and North, you have to introduce a Religious Revolution, since what we need is courage but probably not crude oil and CO2 having been prepared in a Pandora's Box, too, by somebody after the Beginning.

(By the way, dear, have you heard that "Smoking Banned in the Cafes of France?"

Of course, in the beginning, there were no signs of a cigarette, a TV set, a PC set, and a cell phone as well as man-made laws to be introduced billions of years later.)